Background: Laparoscopic Ventral Hernia Repair (LVHR) is approved as an insurance adaptation technique from 2012 in Japan. In our institution, conventional three port LVHR had been performed as a regular surgical option. Furthermore, we recently add the endoscopic component separation method (ECS) to LVHR, in the case of large hernia and infectious wound.

Aim: We present a case of LVHR with ECS, and assessed the safety and efficacy of this technique compared with LVHR only.

Patients and method: Patients who underwent the LVHR in our institute during 2004 and 2016 are included in this study. 38 patients undervent LVHR, and two patients were added ECS.

Case presentation: The patient was 47 year-old female. Total hysterectomy was performed, and the incision occurred SSI. After then, the ventral hernia (13 x 8 cm orifice) was created. We planed LVHR with ECS for her ventral hernia. At first, a 12 mm balloon-tipped trocar was placed at the posterior space to the external oblique aponeurosis. A dissecting balloon was used to create that space head to tail. 5 mm trocar was placed to the space. The external oblique aponeurosis was divided overall with hook type electrocautery. The contralateral side was divided in the same manner. 12mm trocar was inserted to the abdominal cavity. After creating pneumoperitoneum with carbon dioxide gas, a second 5 mm trocar and a third 5 mm trocar was inserted. At first hernia orifice was closured with non-absorbable surgical sutures. We choosed a mesh enough covering the hernia orifice, and put it into the abdominal cavity. The mesh was lifted the abdominal wall by two non-absorbable surgical sutures. After lifting the mesh, the mesh was fixed using the laparoscopic sbsorbable tacker.

Results: LVHR only was performed in 36 cases, and LVHR with ECS was in two cases. Between two groups, there was no significant differences in termes of operative time (LVHR : LVHR with ECS = 122 : 156 min), blood loss, and hospital stay. There were no postoperative complications in each group.

Conclusion: LVHR with ECS would be acceptable procedure for large ventral hernia repair. 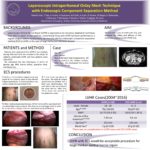