Laparoscopic Hernia Repair – When Is a Hernia Not a Hernia?

Introduction
A wide range of diagnoses can present as inguinal hernia and there are published reviews summarising these findings at open hernia repair. Laparoscopic techniques are being used increasingly in the repair of inguinal hernias. Aside from confirming the primary hernia and finding additional unsuspected hernias, laparoscopy offers the advantage of identifying other pathology. The authors review the literature on unusual findings at laparoscopy for hernia repair and present a rare case concerning laparoscopic identification of a Hydrocele of the canal of Nuck, initially thought to represent an inguinal hernia.

Case Report
A 42-year-old female presented to the outpatient department with a one month history of a painless groin swelling. It was more prominent during activity, improving at rest and disappeared on lying supine. She had a history of laparoscopic cholecystectomy but no other significant medical history. Examination revealed a reducible, non-tender, left groin swelling which was more prominent standing and demonstrated a positive cough reflex. Clinical diagnosis of a left inguinal hernia was made. Due to the risk of strangulation and because in women a femoral hernia must be excluded, the patient was scheduled for a routine laparoscopic hernia repair via the trans-abdominal pre-peritoneal (TAPP) approach. At operation, a cystic swelling which appeared to have a pulsation was found at the left deep inguinal ring. No therapeutic procedure was performed because of concern that there may have been an underlying arteriovenous fistula. Postoperatively, an ultrasound scan demonstrated a discreet fluid-filled cavity extending from the labia majora externally through the inguinal canal into the pelvis. Magnetic resonance imaging (MRI) scan of the area confirmed the diagnosis of a large hydrocele of the Canal of Nuck. Due to the exclusion of a hernia and minimal ongoing symptoms, the patient declined any further treatment and underwent no further surgery.

Results
Previously, diagnoses such as diverticular abscess, Meckel’s diverticulum, perforated appendix, pancreatic pseudocyst, scrotal lipoma and liposarcoma of the cord amongst many have been made at operation for inguinal hernia repair. These have all been identified through open surgery. Laparoscopic approach to the preperitoneal space and particularly trans-abdominal laparoscopy expand the range findings when operating for a suspected hernia. In addition to the presenting hernia, concurrent hernias on the ipsilateral side may be identified and are present in 15.4% and 18% patients with inguinal hernias when assessed by open groin dissection or laparoscopy (TAPP) respectively. Concurrent contralateral hernias are identified by laparoscopy in 13% of patients with a suspected unilateral hernia. There are no previously reported cases in the literature of a Hydrocele of the canal of Nuck being identified through laparoscopy.

Conclusion
Laparoscopic approaches to hernia repair offer the opportunity to confirm the diagnosis of suspected hernias, identify additional hernias (ipsilateral and contralateral), they can demonstrate other causes of a lump and allow the possibility of incidental findings. The authors suggest that in patients with atypical presenting features of a hernia, the TAPP rather than totally extra-peritoneal (TEP) approach to groin hernia repair should be considered because of the greater diagnostic potential. 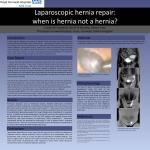