The incidence of Bile Duct Injuries (BDI) after laparoscopic cholecystectomy, which is a life threatening condition that has several medical and legal implications, currently stands at about 0.6%.

The aim of this study is to describe our experience as one of the first centers to use a laparoscopic approach for BDI repair.

A prospective study between June 2012 and September 2014 was developed. Twenty-nine patients with BDI secondary to cholecystectomy were included. All the information regarding the demographics of patients, co-morbidities, presenting symptoms, details of index surgery, type of lesion, pre and postoperative diagnostic work up, therapeutic interventions, videos and details of laparoscopic hepaticojejunostomy (LHJ), were recorded.

Once the work- up at our hospital was finished and their conditions optimized by a multidisciplinary team, all patients were admitted to the OR to make the LHJ or drain bile collections and later perform an interval LHJ. Injuries where staged using Strasberg classification. (table 1)

In all cases, our team started the LHJ with a laparoscopic approach. We advocate the use of side-to side anastomosis, up to healthy bleeding bile epithelium.

A Roux an-Y limb was created with endoscopic stapler in all cases. Beneath the subxifoideal incision an enteropexy was created with the blind limb of the biliary loop in order to gain future percutaneous access for endoscopic rehabilitation if needed.

Postoperative outcome, immediate and late complications as well as mortality were recorded. Long-term evolution was followed through a standardized office visit schedule and outpatients’ records.

Injuries at or above the confluence occurred in 18/29 patients (62%). 27/29 (93.1%) patients had a primary repair at our institution; two had a previous reconstruction and a secondary repair due to anastomosis stricture was needed.

Eight neo-confluences together with resection of segment 4b were performed in all E4 injuries (27.5%). In the remaining patients a Hepp-Couinaud-like anastomosis was built.

The mean operative time was 272 minutes and bleeding 220mL. One conversion to open surgery was done.

Oral intake was started in the first 48 hrs. Bile leak was present in 5 cases. One patient required re-intervention to drain bilioma. The rest of them solved without intervention. No mortality was recorded. The maximum follow-up was 36 months (range 2-36). (table2)

One patient with E4 injury developed HJ stenosis after 15 months. This was solved with endoscopic dilation through the subxifoideal jejunal limb.

Although this are our initial results, the benefits of minimally invasive approaches in BDI seems to be feasible and safe in our patients, even when this is a complex an catastrophic scenario. 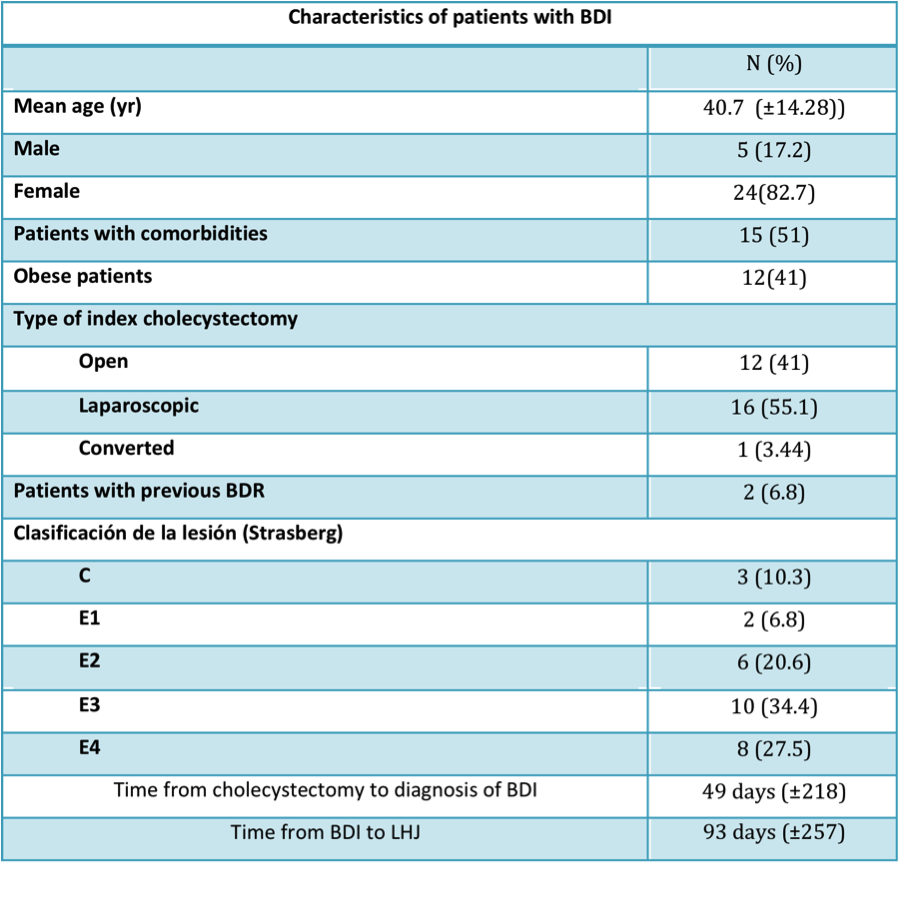 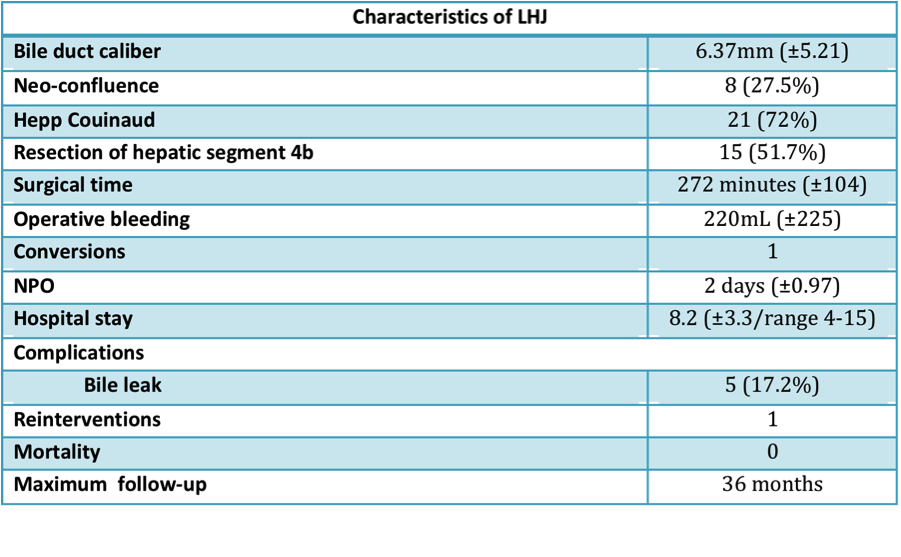