Background: Laparoscopic Heller myotomy has become the surgical procedure of choice for the treatment of esophageal achalasia. A certain percentage of patients will develop recurrent symptoms and require further surgical treatment. The purpose of this study is to define the recurrence rate of symptoms for laparoscopic Heller myotomy, define the causes and patterns of recurrence, and assess the outcomes of re-operation.

Methods: Between 1997 and 2012, 300 consecutive patients underwent laparoscopic Heller myotomy for achalasia by three surgeons in a single surgical practice. All procedures were performed laparoscopically and included partial fundoplication in all but 16 patients. All patients had intra-operative flexible endoscopy by the surgical team. Demographics and clinical data were collected after IRB approval.

Results: We identified 21 patients who required re-operation for recurrence of symptoms including 4 patients who had their initial procedure elsewhere. There were 13 females and 8 males with a mean age of 51 years. Average interval to re-operation was 45 months. Factors contributing to failure of the primary operation included scar / adhesions (n=9), inadequate myotomy (n=9), incarcerated hiatal hernia (n=3), and delayed gastric emptying (n=3). All re-operations were performed laparoscopically and included: division of scar tissue; and/or extension of myotomy; and/or reduction and repair of hiatal hernia; and/or pyloroplasty. There was no mortality but two patients sustained intraoperative perforations that were repaired laparoscopically and two patients developed postoperative evidence of perforation and required laparotomy for repair. Six patients required additional procedures including 2 patients that ultimately required esophagectomy for subsequent recurrent symptoms.

Conclusion: Our data defines the recurrence rate of symptoms after primary laparoscopic myotomy at approximately 5.67% (17/300). Recurrence is typically due to scar and incomplete myotomy although hiatal hernia and gastroparesis occasionally occur. Thorough preoperative evaluation is essential for planning reoperation. Esophagectomy is not necessary as the initial reoperation; laparoscopic techniques are preferable with satisfactory outcomes. Multiple procedures are not uncommon in this subset of patients. 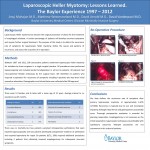