Results: 7 patients underwent single staged, elective laparoscopic hand-assisted total pancreatectomy between 2005 and 2011 at a high volume center. Indications, timing and perioperative results were analyzed. The mean patient age was 58.1 (58.1±6.45) and the median American Society of Anesthesiologist score was 3. Three patients had diffuse IPMN, two had multiple neuroendocrine tumors and two patients had large cystic lesions in head, body and tail of pancreas. Median operative time was 431 minutes (range 348-590) with 300 cc (range 150-1200) of blood loss. The overall morbidity was less than 33%. One patient had deep venous thrombosis and pulmonary embolism requiring anticoagulation. Other patient developed common bile duct stricture which was treated with endoscopic interventions. Mortality within 90 days was zero. Four out of 7 patients are still alive and well. One patient died after one year because of hypoglycemic attack. One patient died after three years due to widespread metastasis of neuroendocrine tumor. One patient died at home because of unknown cause after a year.

Conclusion: Laparoscopic hand-assisted TP can be performed with the morbidity and mortality same as an open approach in an elective one-stage operation in carefully selected patients. The laparoscopic approach is promising but needs more evaluation, careful patient selection and higher level of laparoscopic skills. 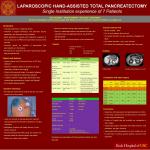