INTRODUCTION: This study sought to evaluate two of the surgical techniques employed to create the gastrojejunostomy during laparoscopic Roux-en-Y gastric bypasses (LRYGB). The hand-sewn anastomosis (HSA) and the circular-stapled anastomosis (CSA) are both common techniques. We hypothesized that the CSA was associated with a greater incidence of anastomotic complications such as marginal ulcer and stenosis. As a secondary aim, we also sought to determine if perioperative outcomes and long-term weight loss varied by technique.

METHODS AND PROCEDURES: This study is a retrospective review of patients who underwent primary LRYGB at the Medical College of Wisconsin from January 2010 to December 2011. Procedures were performed by two surgeons (MIG and JRW). Clinical information and perioperative outcomes were collected up to one year following surgery. Statistical analysis of our data was conducted using VassarStats (Vassar College, Poughkeepsie, NY). Two-tailed Fischer’s exact test was used to compare categorical data, and continuous data were compared using two-tailed T-tests.

RESULTS: A total of 190 subjects underwent LRYGB during the study interval. The majority of subjects underwent HSA (table). The overall complication rate was 21.6%, with 41 of 190 patients experiencing one or more complications. There were no gastrojejunostomy leaks in this series. Most complications were Clavien Classification Grade III requiring endoscopic, radiologic, or surgical intervention (3 (2.2%) HSA patients and 6 (10.9%) CSA patients experienced grade III complications within 30 days post-surgery, p=0.02). Seven surgical re-operations were performed in the 30-day postoperative period to treat one septic wound and six intra-abdominal hematomas.

CONCLUSIONS: The CSA technique of gastrojejunostomy in gastric bypass is associated with a higher rate of non-life threatening anastomotic complications than the HSA technique. Operative times are significantly longer for HSA, but LOS and long-term weight loss are equivalent. 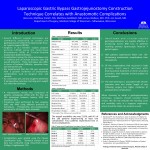