Background: Although laparoscopic Roux en Y gastric bypass (LGB) has been proven to have numerous advantages over the open technique, internal hernia formation has been cited as a common and life-threatening complication associated more frequently with the laparoscopic technique.
Methods: A review of all patients who underwent a LGB between 2003 and 2007 by a single surgeon was undertaken. The operative technique was standardized throughout the study period: An antecolic, antegastric standard LGB was performed in all cases; The biliopancreatic limb was 40cm in length; the length to which the small bowel mesentery was divided depended on the Roux limb tension; and the jejunojejunostomy mesentery was closed.
Results: 533 consecutive patients were followed for an average of 2.0 years. Follow up at 1, 2, 3 and 4 years was 96% (134/139), 83% (156/188), 66% (114/173) and 60% (20/33), respectively. Mean patient age was 43.6 (range 15-76), mean initial BMI 47.6 (35-82) and 77% of patients were female. Only one patient was diagnosed with an internal hernia. The patient presented seven months post-operatively with a hernia underneath the mesentery of the Roux limb. Ten other patients underwent diagnostic laparoscopy for abdominal pain. Findings included adhesive bands in two patients, cholecystitis (3), intussusception (1), abdominal wall hernia (2) and no findings (2). No deaths or other long-term sequelae occurred in any of these patients.
Conclusions: Laparoscopic gastric bypass does not necessarily increase the propensity to develop internal hernias. Abdominal pain after gastric bypass requires prompt diagnosis and laparoscopy often finds significant pathology. 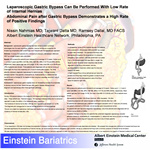