Methods and Procedures: We retrospectively reviewed the medical records from a prospectively collected database of patients who underwent laparoscopic gastrectomy from May, 2003 to April, 2012 in a single center. The patients were classified into three groups: a gastrectomy only group as a control (no simultaneous resection or NS), a combined resection group (CB) characterized by additional resection due to tumor invasion and extensive lymphadenectomy, and a concomitant resection group (CC) including patients with other pathologic conditions. The clinical outcomes, in particular morbidity and mortality, were compared between the three groups.

Conclusions: Laparoscopic simultaneous organ resection during laparoscopic gastrectomy for gastric cancer prolonged the operation time and hospital stay but did not increase morbidity and mortality. 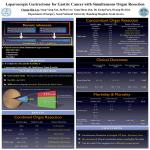