INTRODUCTION
Cancer of the stomach is the fifth most common cancer in men and the seventh most common cancer in women in Singapore. Gastrectomy with D2 lymphadnectomy has been proven to be the gold standard for the treatment of gastric cancer. Laparoscopic or minimally invasive gastrectomy has become more and more popular nowadays since its introduction by Kitano et al in 1994. Laparoscopic gastrectomy with D2 lymphadnectmy has been shown to be a safe and feasible procedure for the gastric cancer patients.
The objective of this study is to review the initial series of laparoscopic gastrectomies done in Tan Tock Seng Hospital, Singapore’s second largest acute care general hospital with 1,400 beds.

METHODS AND PROCEDURES
A retrospective review of patients who underwent laparoscopic gastrectomies for stomach cancer from July 2008 to August 2011 was done using a prospectively collected gastric cancer data base and medical records.

RESULTS
A total number of 34 patients underwent laparoscopic gastrectomies for stomach cancer from July 2008 to August 2011. All the cases were done laparoscopically and there was no conversion to open surgery. 59% (n=20) were male and 41% (n=14) were female. The mean age of the patients was 64 years old. The median ASA score of the patients was 2 and average length of stay was 11 days. Among 34 patients, 5.88% (n=2) had proximal gastrectromies, 14.72% (n=5) had total gastrectomies and 79.4% (n=27) had distal/ subtotal gastrectomies. Mean operative time was 251 minutes. The mean number of total lymph nodes dissected was 20. All patients had R0 resection and resection margins were all clear. 30 days perioperative mortality rate was 0%. 2.94% (n=1) had anastomotic leak and thus unplanned return to OT rate was 2.94% (n=1).

CONCLUSIONS
Our initial series showed that laparoscopic gastrectomies are safe and feasible. The oncological clearance, morbidity and mortality rates are comparable to that of open surgeries in the experienced hands. 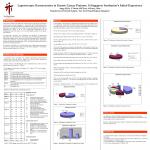