Laparoscopic Extraction of a migrated Intrauterine Device from the Sigmoid Colonic wall under Colonoscopic Visualization.

Migration of intrauterine contraceptive devices (IUDs) into the
peritoneal cavity is uncommon, but may result in serious complications
including bowel perforation. We present the case of a 30 year old
female with migration of an IUD into her sigmoid colonic wall five
months after insertion.

Five months after an IUD was inserted into a previously healthy
patient, a routine pelvic examination failed to identify the device in
the uterine cavity. Abdominal X-Ray detected the device in the region
of the left pelvic brim. A diagnostic laparoscopy was attempted and
aborted by GYN when a limb of the device was seen protruding from the
sigmoid colon.

Using a combined laparoscopic and endoluminal approach, we confirmed
that there was no invasion of the device into the colonic lumen. Using
harmonic scalpel, we carefully dissected off the device from the
extensive pericolonic adhesions and colonic wall under direct
colonoscopic visualization. Attention was paid not to breach the colon
during the dissection to avoid fecal spillage. The device was
successfully extracted. Post-operative x-ray confirmed the absence of
additional foreign bodies. Patient was discharged the following day
without complications.

A combined endoscopic and laparoscopic approach for extraction of
intrabdominal foreign bodies can be safe, effective, and can provide
accurate assessment of breaches in the colonic mucosa. Laparoscopic
approach can avoid the attendant complications of exploratory
laparotomy in carefully selected patients. 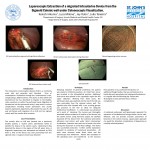