Laparoscopic Heller myotomy is the preferred approach for the treatment of achalasia. The purpose of our study was to evaluate the number of laparoscopic Heller myotomies performed before and after the implementation of a minimally invasive gastrointestinal surgical program (MIP) in 1998.
A retrospective chart review was conducted on all patients who underwent laparoscopic Heller myotomy from 1993-2007. Data collected included hospital volume, average distance traveled, and outcomes and was compared for three different time periods: group I (1993-1997), group II (1998-2002), and group III (2003-2007).
Our sample consisted of 137 patients, 74 (54%) males and 63 (46%) females. The annual volume of cases increased considerably over the three time periods, with 8 cases in group I, 58 cases in group II, and 71 cases in group III; a significant increase between groups I and II, corresponding with the establishment of laparoscopic expertise (p< 0.0001). Laparoscopic surgical technique increased significantly (p 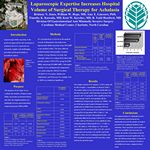