INTRODUCTION: Laparoscopic distal gastrectomy (LDG) with dissection of the regional lymph nodes has become a common procedure among endoscopic surgeons. But it has still some technical difficulties in dissecting lymph nodes at the supra-pancreatic area especially for beginners. To reduce this difficulty, we have stuck to coaxial scope setting.
Our procedure is shown as follows:

RESULTS: We have performed LDG with dissection of the regional lymph nodes (D2) for gastric cancer patients. Dissecting lymph nodes at the supra-pancreatic area was easier in our procedure with coaxial scope setting, because the operator could see the lesion in front of him in the coaxially set monitor over the patient head. This setting was greatly helpful to the operator and his stress in the operation was reduced. 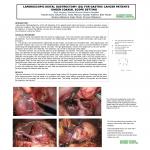