Methods: After mobilization of the stomach and esophagus, the esophagus was ligated above the level tumor. A semicircumferential esophagotomy was made at the anterior wall above the tumor. Then the suture-tied-anvil was inserted into the esophagus with suture outside. A linear stapler was applied to transect the esophagus adjacent to the incision left the suture not be cut. The stem of the anvil was pulled out by drawing the suture for intracorporeal esophagojejunostomy after the negative rapid pathology result of proximal margin confirmed. Anvil insertion time was defined from the semicircumferential esophagotomy to the stem of anvil pulled out.

Results: From December 2011 to August 2015, 34 patients with proximal gastric cancer successfully underwent totally laparoscopic radical total gastrectomy and intracorporeal esophagojejunostomy using a suture-tied-anvil direct insertion technique. There was no reconstruction-related complication during operation or conversion to open surgery. One patient developed anastomotic stricture that was resolved with endoscopic dilatation. The mean operative time was 257.5±42.3 min within a mean anvil insertion time of 6.2±2.5 min and the mean esophagojejunostomy anastomosis time was 26.4±7.9 min. The mean blood loss was 70.4±22.3 ml. The mean first time of flatus was 47.5±18.2 hours and the time of fluid intake was 55.6±17.2 hours. The hospital stay was 8.1±3.2 days. 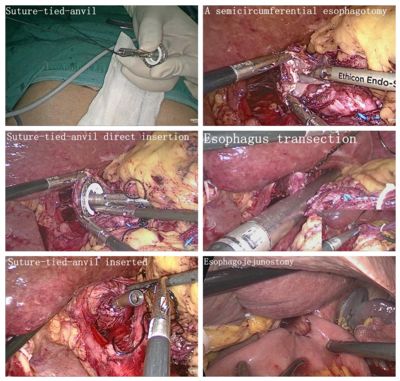