OBJECTIVE: Single-incision minimally invasive surgery in the past has been associated with incisions 2.5-3.0cm in length, creating controversy with regard to possible higher rates of incisional hernia. We investigate a novel single-incision surgical platform (SI Platform), developed by Fortimedix Surgical B.V., compatible for insertion through a standard 15mm trocar. The objective of this study is to evaluate the safety and feasibility of the SI Platform.

DESCRIPTION: The SI Platform is currently a Phase I investigational device. It features articulating surgical instruments for the purpose of achieving triangulation after insertion through a multiple-use introducer. In contrast to other single-incision platforms, which require larger incisions, the SI Platform’s introducer requires only a standard 15mm laparoscopic trocar.

There are four ports within the introducer which allow for a 5mm laparoscopic camera, two instruments, and a 2.7mm suction/irrigation device. The SI Platform is held in place with a standard adjustable positioning arm secured to the operating table. Each instrument has a standard laparoscopic end-effector (Figure 1a,1b). Instruments are capable of 360-degree axial rotation as well as significant lateral, superior/inferior, and anterior/posterior mobility. 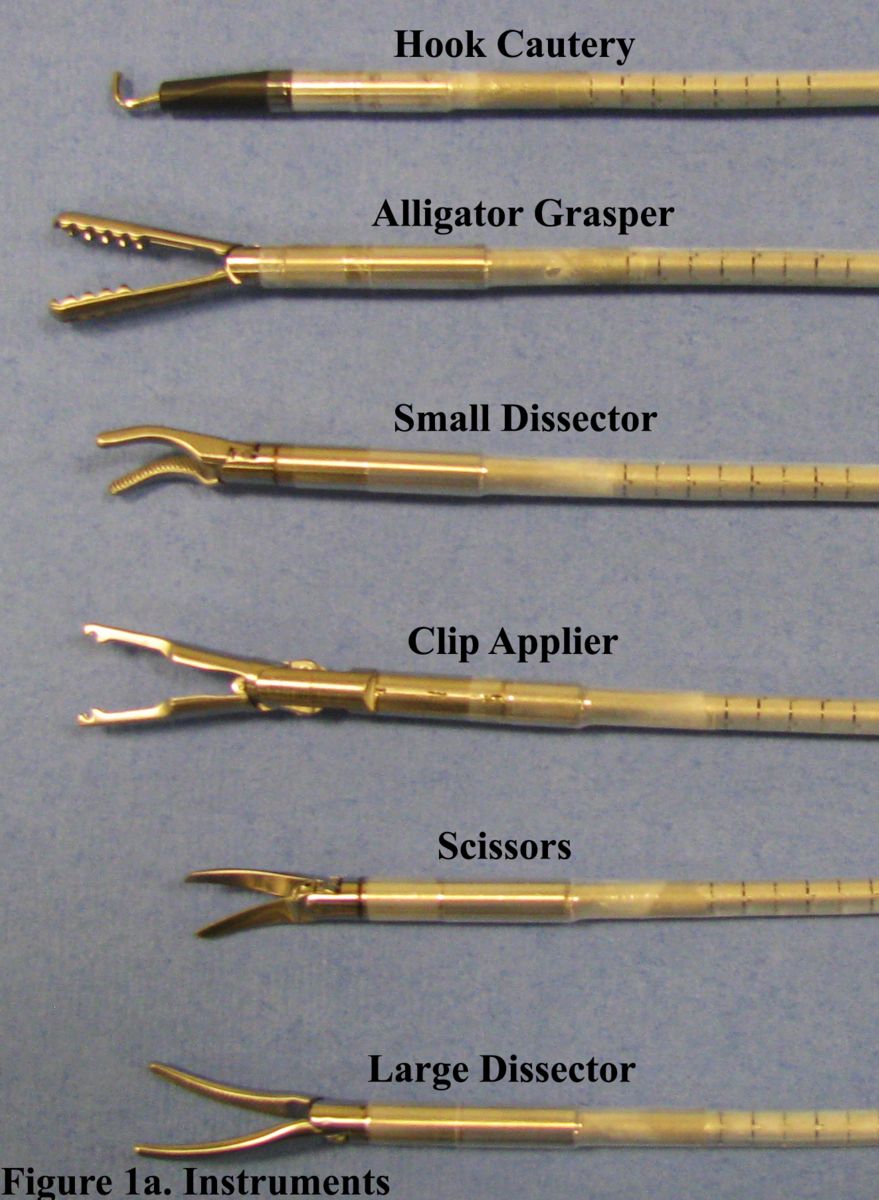 A prospective, single-arm feasibility study was performed at a single-center. Inclusion criteria were age 18-75 years and cholelithiasis without evidence of cholecystitis. Patients were excluded if they had acute cholecystitis, dilation of the biliary tree, a high-risk for general anesthesia, severe coagulopathy, BMI>40, or choledocholithiasis. Endpoints included the success rate of the SI Platform, hospital length of stay, post-operative pain medication usage, cosmetic results, and presence of hernia.

RESULTS: Six patients (5 female) with an average age of 41 years and BMI 28 underwent cholecystectomy with the SI Platform. Average OR time was 91 minutes (63-152), average blood loss 6ml (5-10), and umbilical incision length did not exceed 15mm in any case. One case was converted to standard laparoscopy due to mechanical failure of the clip applier instrument. Despite mechanical issues noted, safety was not compromised and there were no intraoperative complications. Post-operatively, two patients developed a self-resolving umbilical hematoma. Average length of stay was 13 hours (10-24hr). Pain control was achieved solely with diclofenac, which was discontinued within 7 days. At one month follow-up there were no complications, including zero umbilical hernias (anticipated additional follow-up at 6 months and 1 year).

CONCLUSIONS: This phase I study proves that single-incision cholecystectomy through a 15 mm trocar with the Fortimedix Surgical B.V. SI Platform is feasible, safe, and reproducible. Additional major benefits observed include excellent triangulation and range of motion as well as exceptional cosmetic results. Further studies will be needed to evaluate long-term hernia rates.