Retained CBD stones were safely treated through the biliary drainage sinus tract. At a mean follow up time of 130.8+/-26.4 months (range 70.6-178.7 months) no biliary stricture at the site of the choledochotomy has been observed.
Conclusions: Laparoscopic CBDE during LC for stones in patients with a previous gastric resection is feasible and it does not increase the conversion rate. The presence of complex ductal stone disease is associated with a higher retained stones rate but this may be safely solved postoperatively through the biliary drainage sinus tract avoiding endoscopic sphincterotomy which is often unsuccessful in these patients. 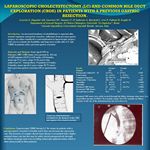