Background: Left sided gallbladder is a rare congenital anomaly. It can be (I) Medio position (ii) sinistro position and (iii) Situs inversus.[1] In medio position, GB is displaced medially to lie on the undersurface of the quadrate lobe (segment IV) but still on the right side of falciform ligament. In sinistro position, GB lies under left lobe (segment iii) to the left of the round ligament. In situs inversus the position of abdominal and thoracic organs is a “mirror image of the normal one in the sagittal plane. 270 degree clock wise rotation of abdominal organs in embryonic life instead of normal counter- clock wise rotation is the cause. Incidence of cholelithiasis in situs inversus is same as in normal anatomy. Only 36 cases of lap- cholecystectomy in situs inversus is reported up to year 2010. [2]

Material & Method: A 35 years old female was admitted with H/o recurrent pain in left hypochondrium since 1year. Ultra sound study showed gallbladder in left hypochondrium, with stones. Bigger part of the liver was in left side. Her X-ray chest showed heart in right side. After confirming her fitness for surgery under general anesthesia she was operated. Laparoscopic cholecystectomy was performed.

Result: Patient recovered uneventfully and was discharged from the hospital on 2nd post operative day. She was followed up for one year. No complication was detected during this period.

Discussion: Lap chole in situs inversus is difficult due to the fact that the anatomy is mirror image of that of routinely seen and most of surgeons are right – handed. Difficulty is also increased if there is biliary and vascular anatomical variations. In our case there is no major vascular or biliary anatomical abnormality. Surgeon standing in French position or in right side of the patient is essential. We also find that for a right – handed surgeon, the right hand should operate from left mid- clavicular port or left anterior axillary line port to adjust the angulation, whenever necessary.To detect ductal and vascular anomalies pre- operatively, investigations like MRCP, Angiography, 3D CT abdomen with drip infusion cholangiography are helpful.

Conclusion: Lap chole in situs inversus can be performed safely. Modifications in technique and cautious dissection are important. Surgeon should have prior idea about any vascular or biliary anatomical abnormality to plan for a safe surgery. 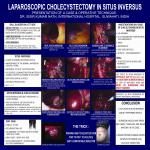