INTRODUCTION: Anterograde access to the mesenterico-portal venous system is necessary for advanced interventional procedures like for example portal vein recanalization in chronic obstruction. Open ileocolic vein dissection is the standard approach, exposing fragile patients to complications (ascitis, infections and adherences), especially in cirrhotic ones. The aim of this pilot study was to develop a combined laparoscopic and percutaneous access to the mesenterico-portal vein system.

METHODS: Experiments were performed in a hybrid surgical-radiological suit, under sterile conditions. Five female pigs aged 6 months and weighing between 41 to 45kgs were studied. Under general anaesthesia, laparoscopic dissection of the cranial mesenteric vein was performed. Under endoscopic guidance, the vein was catheterized percutaneously (Figure 1). Complete 3D portography were obtained using CT-scan imaging and portal contrast injection. After catheter retrieval, haemostasis at the puncture site was obtained with selective laparoscopic 5.0 Prolene suture (Figure 2). Animals were kept alive for two weeks and two additional portal accesses were attempted from the same vein, after 7 and 14 days, using the same technique.

RESULTS: Access to the portal vein was feasible in all animals (success rate 100%). The mean access time was 15 +/- 3min. No immediate complications were observed. Particularly, no intraoperative or postoperative haemorrhages were detected. Second-look at 7 and 14 days were all successful. No adhesions were observed and the vein was accessible and patent in all animals. Portography demonstrated the absence of complications related to the previous catheterization.

CONCLUSION: This experimental study shows that a laparoscopic assisted trans-abdominal anterograde portal vein catheterization is feasible, reproducible and can be repeated in the same animal. This novel approach may potentially offer some advantages compared to the open approach. 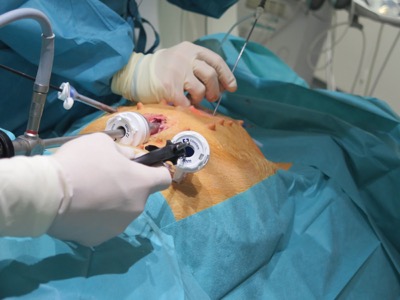 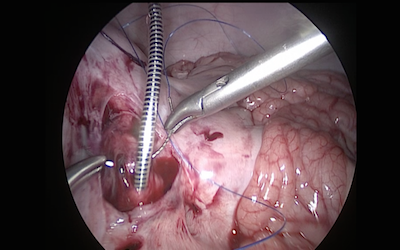