Introduction: Laparoscopic splenomegaly has become the standard surgery for the management of many hematological disorders and hypersplenisms. Although the benefits of laparoscopic resection of the spleen has been widely accepted, laparoscopic and hand assisted splenectomy for a very large spleen and portal hypertension are still considered relative contraindications. (Surg Endosc. 2008)   Massive splenomegaly is defined as the splenic volume of 500ml or more by volumetry in computed tomography (CT). The aim of this study is to estimate the operative short-term outcomes of laparoscopic assisted splenectomy in massive splenectomy.

Methods and Procedures: At Kumamoto Shinto General Hospital and Kumamoto Regional Medical Center, we performed a retrospective analysis of 26 patients who underwent laparoscopic assisted splenectomy from 2010 through 2013(One patients was excluded because of conversion to laparotomy). Surgical outcomes, including operation time, counted blood loss, postoperative complications, postoperative hospital stays and platelet count of the preoperative and the one month after surgery were compared in massive splenomegaly (MS) group, not massive (normal) splenomegaly (NS) group. To compare groups, Unpaired t-test with or without Welch’s correction was applied to continuous data and the chi-square tests were applied to categorical data. A P value of less than 0.05 was considered significant.

Results: Of the 26 patients, 11 (42%) were MS group (malignant lymphoma were 4, hypersplenisms were 7) and 15 (58%) were NS group (malignant lymphoma were 2, hypersplenisms were 13). There was no difference in age, gender, Body Mass Index and preoperative platelet count. In the MS group, splenic volume by volumetry in CT was significantly bigger than that in the NS group (894ml vs. 339ml; p=0.003). Operation time, postoperative complications, length of postoperative hospital stay and platelet count of the one month after surgery were similar among both groups. There was no statistically significant difference in operation time (MS group 186min. vs. NS group 168min.), otherwise there was statistically significant difference in blood loss (MS group 556g vs. NS group 190g; p=0.0016).

Conclusion: Although there is small number of patients and needs future examination, among patients with massive splenomegaly, laparoscopic assisted approach is feasible and safe if careful about blood loss getting increasing. 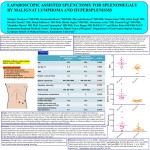