Background : The tremendous advancements in single incision laparoscopic surgery has prompted us to perform laparoscopic single incision hernia repair.
Methods : A total of 10 patients ( 8 men and two women ) underwent laparoscopic single incision hernia repair between June 2010 and January 2011. The mean age of the patients was 48.2 years ( 21 – 74 years ). Five patients had unilateral inguinal hernia, three patients had bilateral inguinal hernias and two patients had femoral hernias one of which was obstructed. One patient had history of previous hysterectomy. Recurrent hernias were excluded from our study. Initial 5 cases were operated via single incision TAPP approach while the latter 5 cases underwent single incision TEP repair. All patients were operated via a 2cm transverse subumblical incision through which 3 conventional trocars were placed. Dissection was done using standard straight instruments as in conventional laparoscopy followed by placement of 15 X 12 cm prolene mesh unilaterally or bilaterally.
Results : No patient in the study underwent conversion to multiport laparoscopy and all procedures were completed by the initially selected approach. The mean operative time was 68.4 minutes. One patient developed urinary retention in the immediate post operative period necessitating catheterization and one developed seroma two weeks postop for which aspiration was done. The mean hospital stay was 1.2 days. There has been no recurrence so far in short term follow up of 6 months.
Conclusion : Based on our experience, LESS hernia repair is both feasible and safe in hands of experienced laparoscopic surgeons with a superior cosmetic outcome as compared to conventional laparoscopy. The technical difficulty of the procedure leading to possible intraoperative complications and the long term outcomes are yet to be determined. 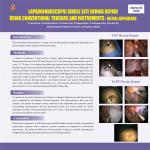