University of Occupational and Environmental Health

BACKGROUND:
Laparoendoscopic single-site (LESS) surgery is a new surgical modality with cosmetic benefits over conventional endoscopic surgery. However, there have been few reports about LESS surgery in common bile duct exploration.
This report presents a LESS surgical technique to manage CBD stones, and compares the results of LESS and conventional laparoscopic approaches for common bile duct exploration.
PATIENTS AND METHODS:
This retrospective review analyzed 81 patients who underwent laparoscopic common bile duct exploration (LCBDE) for choledocholithiasis, including 16 LESS (LESS group) and 65 conventional laparoscopic (Conventional group) approaches. LCBDE was performed via choledochotomy with a C tube (n=72) or T tube (n = 3), or transcystic duct choledochoscopy (n = 6).
In the conventional group, a 12 mm camera was inserted at the umbilicus, two 12 mm ports at the subxiphoid position, and the other two 5 mm ports at right upper quadrant. In the LESS group, multiple trocar method (through an umbilical incision) was done in nine cases, glove method in three cases, and EZ Access method in the other three cases.
All routine procedures, including intra-operative ultrasound, choledochoscopy, and intra-operative cholangiography guidance, were performed in both groups. The Radius Surgical System (Radius) is a flexible manual manipulator that was applied in 23 cases for suturing and ligation to overcome the difficulties associated with laparoscopic surgery, especially in LESS surgery.
RESULTS:
The median number of stones was 5.8, and the median diameter of stones was 9 mm. Stone clearance from the CBD was achieved in 15 (94%) of 16 attempted cases in the LESS group and 63 (97%) of 65 attempted cases in the Conventional group. Three patients (4.6%) from the Conventional group and one patient (6.3%) from the LESS group required conversion to open choledocotomy. No mortality was associated with this procedure, and the morbidity was similar in the Conventional (6.2%) and LESS (6.3%) groups. No major complication occurred in either group. Although the difference was not statistically significant, the median length of the operation was shorter in the Conventional group than in the LESS group (250 min vs. 267 min). The mean intraoperative bleeding was significantly greater for the Conventional group compared with the LESS group (47.5 g and 16.3 g, respectively; p=0.02). The mean postoperative stay was similar in both groups (12.5 days and 13.4 days, respectively). Recurrent stones were not observed during the follow-up period in the LESS group (mean follow-up period: 19 months), but four recurrent stones (6.2%) were observed in the Conventional group (mean follow-up period: 120 months). It was possible to close the common bile duct opening with regular forceps, although the Radius provided an optimal penetration angle and was useful for both intracorporeal suturing and ligation for closure of the common bile duct opening, even in LESS surgery.
CONCLUSION:
LESS surgery was successfully applied for common bile duct exploration. This method is feasible and produces superior cosmetic results compared to conventional laparoscopic surgery. Further analyses of LESS versus conventional LCBDE are necessary regarding the short-term surgical outcomes and long-term clinical courses. 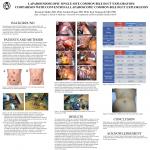