Lack of knowledge regarding the risk and long-term effects of adolescent bariatric surgery is a primary determinant preventing surgical referral.

Introduction: Despite greater than 5% of adolescents being afflicted with morbid obesity, and increasing evidence that adolescent obesity decreases life-expectancy and quality of life into adulthood, it has been documented that general pediatricians and primary care physicians caring for obese adolescents are reluctant to refer to bariatric surgery. However, little is known about the knowledge base of pediatricians regarding bariatric surgery and what factors are driving the reluctance for bariatric referral.

Methods: We designed and administered a 10 question survey to pediatric residents in their last year of training to determine several factors: (1) what is the general pediatric resident’s comfort level treating the co-morbidities of adolescent obesity, (2) would they refer an adolescent morbidly obese teenager with multiple co-morbidities and failed self-attempted weight loss to surgery, and (3) what perceptions prevent referral.

Results: The survey response rate was 66% (n=20). Ninety percent of residents had treated a morbidly-obese adolescent in residency; however, only 16% felt they had been adequately trained to treat the co-morbidities related to morbid obesity (type 2 diabetes, hypertension, hyperlipidemia, and depression). Thirty-nine percent of residents were willing to treat a 17-year old, morbidly obese, female with co-morbidities who had attempted but failed a year of supervised weight loss with a hypothetical weight loss medication. This medication was described to have the same side-effect and complication profile published on adolescent bariatric surgery. Only 12% of residents would refer this same patient for bariatric surgery. Fifty-eight percent of residents said that a primary reason they would not refer was due to unknown long-term outcomes of bariatric surgery in adolescents. In addition, 58% also had concerns regarding the invasiveness and irreversibility of the procedure given the patient’s age. The average 30-day mortality rate of bariatric surgery was believed to be 4.7% (range 0.5%-20%).

Conclusions: Misperceptions about the risks of adolescent bariatric surgery, and a lack of knowledge regarding outcomes, is a primary deterrent to referral. Introduction and integration of bariatric, adolescent medicine into the curriculum of a pediatric residency could help overcome these knowledge deficiencies and increase referral of appropriate bariatric candidates. 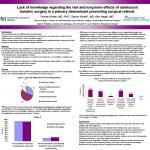