Is There Room for Improvement in the Diagnostic Accuracy of Intraoperative Cholangiogram?

BACKGROUND
Post-cholecystectomy ERCP is commonly performed for abnormal findings of the intraoperative cholangiogram (IOC) interpreted by the operating surgeons. Our objective was to assess the accuracy of IOC for diagnosing choledocholithiasis and predicting the need for post-operative ERCP.
METHODS
A retrospective review of patients who underwent postoperative ERCP for the identification of a filling defect during IOC at an academic institution between 2006 and 2011 was performed. Patient demographics, IOC and ERCP findings were recorded. The surgeons’ interpretation of the IOC was compared to that of the radiologist’s and to the findings of the ERCP to determine the accuracy of intraoperative and radiographic interpretation.
RESULTS
Ninety-seven cases that had an abnormal filling defect during IOC and a postoperative ERCP were identified and reviewed. Patient age was 42±16 years, BMI was 30.5±7.5 kg/m2, 74% were females, and 55% Caucasians. Conversion rate was 1% and length of stay 4.6±2.9 days. All IOCs were reviewed by a radiologist who confirmed a filling defect in only 55% of patients. Subsequent ERCP revealed stones in 52.5%, sludge in 18%, ampullary stenosis in 8%, and no abnormal findings in 22%. The accuracy of the surgeon’s interpretation of IOC was 73% and that of the radiologist 78% (p>0.05). In cases where glucagon was used (N=25), the accuracy was improved (88.4% versus 67%; p=0.04). Unsuccessful CBD exploration requiring postoperative ERCP was performed in 12 patients; challenging anatomy, inability to access the CBD due to tortuosity of the cystic duct, or inability to retrieve the stones through the cystic duct were reasons for failure. The subsequent ERCP revealed stones in 2 patients, sludge in 1 patient, and normal findings in 9 patients. CBD dilatation (size > 6mm) was seen in 59.2% of the entire sample, whereas 79.6% of the patients with abnormal ERCP (stones, sludge, or stenosis) had a dilated CBD. The CBD was dilated in 64.7% of ERCPs with stones, in 37.5% of ERCPs with ampulla stenosis, and in 23% of the ERCPs with sludge.
CONCLUSION
The accuracy of IOC as interpreted by the operating surgeon during cholecystectomy approached 80% and was not significantly different than that of the radiologist and may be increased by using glucagon. The use of transcystic duct exploration, intra-operative ultrasound, or post-operative MRCP as an adjunct to IOC prior to ERCP needs to be studied and may reduce the incidence of negative ERCPs. 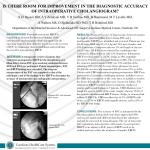