Is There An Optimal Operation Time for Elective Laparoscopic Colectomy?

INTRODUCTION: With growing usage of minimally invasive approaches, utilization of laparoscopy in technically challenging cases is becoming increasingly prevalent. This increased use of MIS has generally been accompanied by prolongation of the operative time (OT). We investigated how the OT affect the outcomes of laparoscopic partial colectomy (LPC).

METHODS AND PROCEDURES: The ACS-NSQIP targeted colectomy files were utilized to identify patients who underwent elective LPC from 2012 to 2014. All patients underwent primary anastomosis. Exclusion factors included conversion to open procedure, ostomy formation, and emergent procedures. Patients were divided into four groups (L1-L4) based on mean OT (167 minutes) and standard deviation (SD, ±78 min). This defined L1 as two SD less than the mean (OT < 89 min), L2 as one SD less than the mean (90min

CONCLUSION(S): Our data revealed that patients with shorter operative times experience significantly lower serious morbidity, risk of SSI, anastomotic leak, and ileus compared to patients whose operative times exceed the mean. These findings suggest that LPC procedures with OT longer than average (167 min) have higher postoperative complications compared to the resections with OT shorter than average. 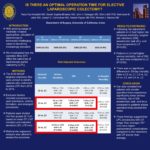