Is There a Role for Laparoscopic Surgery in Recurrent Crohn’s Disease?

MATERIALS AND METHODS: Patients undergoing elective laparoscopic intestinal resection for recurrent Crohn’s disease between 2003-2012 were case-matched with patients undergoing open surgery based on disease phenotype (penetrating, stricturing, non-stricturing and non-penetrating) and year of surgery. Comparisons of the groups were performed by using χ2 or Fisher exact tests with respect to categorical data and by using the Wilcoxon rank-sum test with respect to quantitative data. Parametric data were reported as means and nonparametric data as numbers. 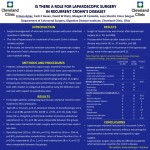