Is Surgical Smoke Harmful to Theatre Staff? A Systematic Review

Objectives: The aim is to evaluate the properties of surgical smoke and the evidence for the harmful effects to those exposed. Smoke can be generated when using energy based surgical instruments. Airborne by-products may have potential health implications for theatre staff.

Methods and procedures: MEDLINE, PubMed, Cochrane Database, Embase classic and Embase and the metaRegister of Controlled Trials were searched using three domains of MeSH exploded terms. Included studies needed to report the constituents found in the smoke plume during human surgical procedures, the methods used to analyse the smoke, the implications of exposure to smoke and the type of surgical instrument that generated the smoke. Studies were excluded if they were animal-based, pre-clinical experimental work, conference abstracts and opinion based reports. Common endpoints were particle size, particle characteristics, infection risk, malignant spread and mutagenesis.

Results: 20 studies were included. There is no level 1 evidence supporting the harmful effects of surgical smoke to theatre staff. Particle Size: 5 (25%) studies showed that diathermy and laser can produce ultra-fine particles (UFP) which are respirable in size. The long term outcome of this is unknown. Particle characterisation: 6 (30%) studies demonstrated that several volatile hydrocarbons are present in diathermy, ultrasonic and laser derived surgical smoke. These include toluene, ethyl benzene, styrene, hydrogen cyanide, acetylene and butadiene. These are potentially carcinogenic, but there is no evidence to support a cause-effect to those exposed. Infection risk: Six (30%) papers reported the presence of viruses in laser derived smoke but none of these confirmed viral transmission to the operator. One (5%) study demonstrated bacterial cell culture (staphylococcus aureus) from a laser plume following surgery. Mutagenesis / Malignant Spread: One (5%) study reported the mutagenic effect of smoke and 1 (5%) the presence of malignant cells within smoke in patient undergoing procedures for carcinomatosis.

Conclusions: Potentially carcinogenic components of surgical smoke are small enough to be respirable. However, more evidence over a longer period of time is needed to evaluate the effect of this. Infective and malignant cells are found within the smoke plume but the full risk of this to theatre staff is unproven. Future work could focus on comparing the smoke produced by different energy based devices, the use of removal systems and the long term consequences of smoke exposure. 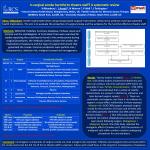