Is Single Port Surgery Is Difficult ? -An Experimental Suturing Model in Dry Box- 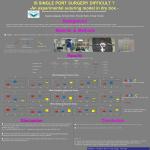