INTRODUCTION
Incisional hernias are the most common long-term complication following laparotomy, occurring after 3 to 13% of operations.
Surgery through a single incision is an alternative to conventional laparoscopy and Natural Orifice Transluminal Endoscopic Surgery (NOTES). Various nomenclature and terminology describe similar surgical methods, such as SPA (Single port access), SPLS (Single port laparoscopic surgery), OPUS (One port umbilical surgery) and LESS (Laparoendoscopic single site surgery). The SPA technique has been applied to several surgeries.
The objective of the study is to communicate our group experience (2 hospitals of Madrid: Infanta Sofía and Torrejón de Ardoz) related to the treatment of ventral hernias using a single incision laparoscopic surgery.

METHODS AND PROCEDURES
We present 33 ventral hernia repairs of two services located in Madrid within July of 2008 and March of 2013. Cases are divided in two groups: the first one include surgeries performed with a single-port access device (R-Port®, Advanced Surgycal Concepts, Whilock, Brey,Ireland). In the second one, the approach is performed with the reduced port laparoscopic technique (12mm-5mm-5mm).
A 3 cm skin incision, located laterally between the iliac crest and costal margin. was made in both groups. In the reduced port technique, fascia was separated using three different incisions.
A 5 mm 30 degree videolaparoscope was used in every case, combined with 5 mm laparoscopic non-articulated graspers and shears and curved intrumental.
The R-Port™ is an abdominal access device which requires an incision of minimum 15 mm. A single external disk which has three special gel valves – two 5-mm valves and a 12-mm valve – capable of maintaining pneumoperitoneum during instrument exchanges, connects to a double-layered plastic cylinder that serves as the common channel or a single port. The internal anchoring ring, when deployed, stays flush against the abdominal wall.
We compare mean operative times, closure techniques, complications, mean postoperative hospital stay, hernia recurrence and trocar site herniation.

RESULTS
There was no significant differences between both groups in either number and type of complications or operative timings (mean follow-up 18 months).
Mean hospital stay was under 24 hours in both groups. Average score of VAS was 2.

CONCLUSIONS
There are no significant differences when comparing single and multi-port single incision techniques of ventral hernia repairs.
We consider SPA surgery of ventral hernias safe and feasible. Cosmetic results are better than in conventional multi-port laparoscopic technique. Wether this approach turns to be superior to conventional laparoscopy remains subject to more substantiaL research. 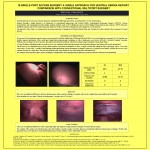