Introduction: Tension-free anterior open (AO) repair, using mesh and/or a plug, is a popular surgical choice for inguinal hernia. Laparoscopic transabdominal preperitoneal repair (TAPP) is gradually increasing, however, TAPP is considered more invasive than AO repair. In general, the TAPP procedure has been considered to take longer and have a higher rate of post-operative complications. The purpose of this study was to compare the TAPP and AO procedures to determine if there is a significant difference in safety outcomes or in the practicability of the procedures themselves.

Methods and Procedures: A total of 104 patients with inguinal hernia were included in this study, of which 51 underwent TAPP and 53 underwent AO repair from April 2015 to August 2016 at Yamaguchi-ken Saiseikai Shimonoseki General Hospital. Patient characteristics (age, sex), surgery-related factors (hernia type, affected side, operation time), and postoperative factors (WBC or CRP values on Day 1 or Day 3 post-procedure, and post-surgical complications) were retrospectively analyzed and compared between the two groups.

Conclusions: Based on a retrospective evaluation of several key parameters, no significant differences were observed between the TAPP and AO procedures that would indicate that TAPP is a safe and feasible operation and it is also comparable in surgical stress to AO repair. 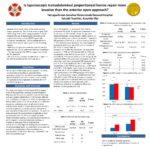