Is Laparoscopic Pancreaticoduodenectomy Associated with Improved Outcomes for Pancreatic Cancer?

Introduction: Pancreaticoduodenectomy is the only treatment that offers a chance for cure in patients with pancreatic ductal adenocarcinoma (PDAC) of the head of the pancreas.   In recent years, laparoscopic pancreaticoduodenectomy (LPD) has been introduced as a feasible alternative to open pancreaticoduodenectomy (OPD) when performed by experienced surgeons.  This study reviews and compares perioperative results and long term survival of patients undergoing LPD versus OPD at a single institution over a 20 year time period.

Methods:  From 1995-2014, 612 patients underwent PD and 252 patients were found to have PDAC.  These latter patients were reviewed and divided into two groups: OPD (n=194) and LPD (n=58).  LPD was introduced in November 2008 and performed simultaneous to OPD within the remaining time period.  90-day perioperative outcomes and long term survival were analyzed.

Results:  Patient demographics were well matched (Table 1).  Operative time was significantly longer with LPD but blood loss and transfusion rate were decreased.  Postoperative complications, ICU stay, and overall hospital stay was similar.  OPD was associated with larger tumor size; LPD was associated with greater lymph node harvest and lower lymph node ratio.  LPD was performed by hand assist method and converted to open in 3 (5.2%) and 14 (24.1%) patients respectively.  Neoadjuvant therapy was performed in 17 (8.8%) and 4 (6.9%) patients for OPD and LPD respectively.  The estimated median survival was 20.3 months and 17.9 months for OPD and LPD respectively.  Long term survival was similar for the two groups at all points through 5 years. 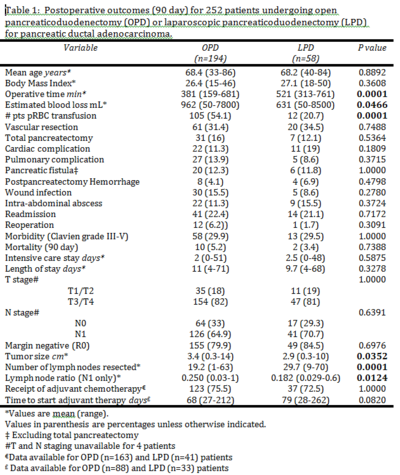