High resolution impedence manometry ( HRiM) is a comprehensive test of esophageal pressure and bolus transit (BT) dynamics. Standard manometry allowed assessment of the esophagus in 4 channels whereas high resolution manometry (HRM) has 32 channels, allowing a clearer assessment of esophageal function . Multichannel intraluminal impedance (MII) is established as a clear way to assess BT through the esophagus. This study was to assess whether impairments in BT seen on MII can also be more clearly assessed with HRM. In addition the level of impaired BT seen by MII was correlated with HRM findings.

METHODS: Consecutive HRiM studies done between June 2011 and August 2012 were reviewed retrospectively. Patients underwent 10 liquid and 10 viscous swallows when possible. Data collected included symptoms, diagnosis, medication use, and HRiM results of liquid and viscous swallows. Bolus transit was measured at 5, 10, 15 and 20cm above the gastroesophageal junction (GEJ). The initial level of impaired bolus exit for each swallow was recorded. Manometric breaks in each swallow by HRM were also recorded to assess for correlation. Patients with achalasia were excluded from analysis.

CONCLUSION: High resolution manometry abnormalities do not correlate well with abnormalities on MII. When patients have abnormalities in BT, the most likely level is 15-20cm above the GEJ. This is at the level of the transition zone of striated to smooth muscle. This level of esophagus should be the level of future evaluation in the pathophysiology of motility disorders. At this time both impedance and HRM contribute to the evaluation of esophageal function. 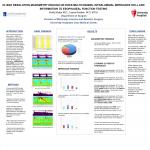