Objective: To see if a two stage procedure limits morbidity while allowing improvement in BMI when converting a gastric band to a sleeve gastrectomy.

Intro: Gastric banding for metabolic syndrome has a complication rate of 10-25% prompting revision to a LSG. Complications include band erosion, band slippage or failed weight loss. We hypothesize that a two stage conversion, when a band slip or erosion was present, would limit morbidity. This study compares postoperative complications and weight loss in a cohort of patients with band complications who were converted with either single stage or two stage procedures.

Methods: With approval from our institutional review board we performed a retrospective analysis of 27 patient cases in which a band was converted to a sleeve over a two-year period. Twelve patients had a two stage conversion and 15 patients had a single stage conversion. Groups were compared for incidence of complications and weight loss. Complications were defined as staple-line leak, bleeding, surgical site infection or sepsis. Groups were also compared for length of stay and BMI at 1,3,6,12 and 24 months. Analysis between groups was performed using T-Tests for continuous variables and Chi-Square Tests for categorical variables.

Results: There were no complications in either group. There was statistically significant reduction in BMI following conversion over the two year follow up period. Additionally, there was no difference in length of hospital stay (p = 0.451).

Conclusion: This pilot study suggests there is no difference in morbidity when a gastric band is converted to a sleeve with a single stage or two stage procedure. Conversion of a band to a sleeve is safe when performed in a two stage approach for band slip or erosion. Conversion is also safe as a single stage approach in the absence of these complications. There was improved efficacy for all patients, with an average decrease in BMI of 8 points. These limited results would benefit from confirmation by a prospective study with a larger sample size. 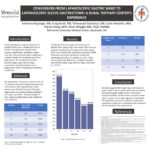