Investigating the Effects of Tension On a Stapled Anastomosis

This study was designed to investigate tensile effects on a stapled circular anastomosis. It has been theorized that a high tension anastomosis contributes to the prevalence of anastomotic failure. Ileorectal anastomoses have among the highest leak rates in all intestinal anastomotic leaks.(Hyman 2007) Lower colorectal surgeries can be difficult to perform due to access restriction and also the limited mobility of the large intestine. Another factor that affects the difficulty of these surgeries is the quantity of tissue to work with. Since approximately 80% of all intestines are small intestine, when a portion of large intestine must be excised, there is less remaining to reconnect. As a result, these circular anastomoses that reconnect the large intestine, especially ones close to the rectum, are sometimes in tension. This study sought to empirically determine how tension affects the integrity of a circular anastomosis

To test how tension across an anastomosis affects the leak strength of that staple line, a circular anastomosis created in a synthetic media. The artificial media was chosen as a first step to take variability out of the samples being tested. A known strain was applied to the anastomosis and intralumenally pressurized using a custom fixture. The fixture utilized an air piston to apply a linear force axially on the sample, thereby applying a known tension and changing its length. The sample was then clamped at the ends and infused with a fluorescent fluid until a leak was observed against the black contrast of the sample. The leak pressure was then compared with the strain applied. Resultant tensions were calculated in %strain. Strain values were determined using the following equation for and converted to percent with respect to the sample’s initial length.

At 0% strain the average initial leak of the anastomosis = 1.555 PSI

At 5% strain the average initial leak of the anastomosis = 0.725 PSI 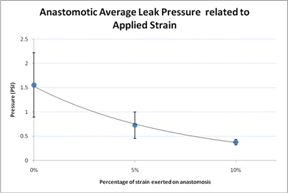 Graph 1. This graph depicts the decline in leak pressure with increased amounts of strain applied to the anastomosis.

The results from this study show that even a small amount of strain can have an extensive impact on the leak resistance of a circular anastomosis in synthetic media. The correlation appears to resemble a curve, 1/x, where the leak resistance is reduced by over 50% per 5% additional strain. In artificial tissue tension had a direct and marked impact on strength of an anastomosis. Another phase of this study will use explanted tissue to more closely understand and mimic the effect of tension on a real circular anastomosis.