Purpose NOTES (Natural Orifice Translumenal Endoscopic Surgery) is a new surgical method with many promising benefits. For NOTES, a highly dexterous tool is required. Hyper-redundant robots can offer such dexterity, but they require complex control algorithms. In this study, we propose a simple, but efficient semi-automatic algorithm to intuitively control hyper-redundant robots to perform NOTES.

Methods A novel control algorithm for hyper-redundant robots is proposed, which combines traditional Jacobian-based control method with “follow the leader” approach. The first seven joints of the robot will be controlled by traditional Jacobian-based algorithm. The remainder of the robot is controlled by “Follow the Leader” algorithm; they will repeat the motion of the first seven joints. This allows the robot to follow the desired trajectory with minimum computational load. A series of simulation was conducted to verify the feasibility of the proposed algorithm.

Results The simulation results show that by using the proposed algorithm, the robot can navigate through a complex geometry while maintaining its orientation. This would allow the surgeons to easily perform NOTES with a hyper-redundant robot.

Fig.1 Study overview (a) target algorithm and (b) simulated robot

Fig. 2 Simulation results (a) posture of robot and (b) orientation of robot 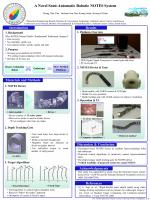