Introduction: Staple line leak is the most feared complication after sleeve gastrectomy. Intraoperative methylene blue and air leak tests are routinely used to evaluate for leak, however the utility of these tests is controversial. The 2012 International Sleeve Gastrectomy Expert Panel failed to reach a consensus about whether routine intraoperative leak tests should be performed. Additionally, these tests are not benign – they introduce increased instrumentation, with reports of nasogastric tubes causing esophageal perforation, as well as increased costs in the form of resource utilization. We hypothesize that the practice of routine intraoperative leak testing is unnecessary during sleeve gastrectomy.

Methods and Procedures: A retrospective cohort study was designed using a prospectively-collected database of seven bariatric surgeons from two institutions. 1,257 consecutive patients who underwent sleeve gastrectomies between March 2012 and June 2014 were included. The performance of intraoperative leak testing and the type of test (air or methylene blue) were based on surgeon preference. Data obtained included BMI, patient demographics, comorbidity, presence or absence of intraoperative leak test, result of leak test, and type of test. The primary outcome was leak rate between the leak test (LT) group and the non-leak test (NLT) group. SPSS-22 was used for univariate and multivariate analyses.

Results: Of the 1,257 sleeve gastrectomy cases, most (99.68%) were laparoscopic, except for two (0.16%) open and two (0.16%) converted cases. 1,164 (92.6%) patients had routine intraoperative leak tests performed; there were no positive intraoperative leak tests in the entire cohort. 93 patients (7.4%) did not have intraoperative leak tests performed. Thirteen (1%) patients developed staple line leaks, with no difference in leak rate between the LT and NLT groups (1% vs. 1.1%, p=1.000). There were some baseline differences between the groups, however [Table 1]. After adjusting for these differences and other possible confounders with binary logistic regression, the observed lack of association between leak and intraoperative leak test remained. In this cohort, leaks presented at a mean of 11.3 days postoperatively (range=[1,35]), with only two leaks presenting during the index admission. Of those two, one patient with a leak seen on postoperative day 1 esophagram underwent a repeat leak test during diagnostic laparoscopy, which was negative. Despite suture reinforcement, the leak persisted and the patient eventually required conversion to gastric bypass.

Conclusion: Intraoperative leak testing has no correlation with postoperative leak occurrence after laparoscopic sleeve gastrectomy and is not predictive of the later development of staple line leak. 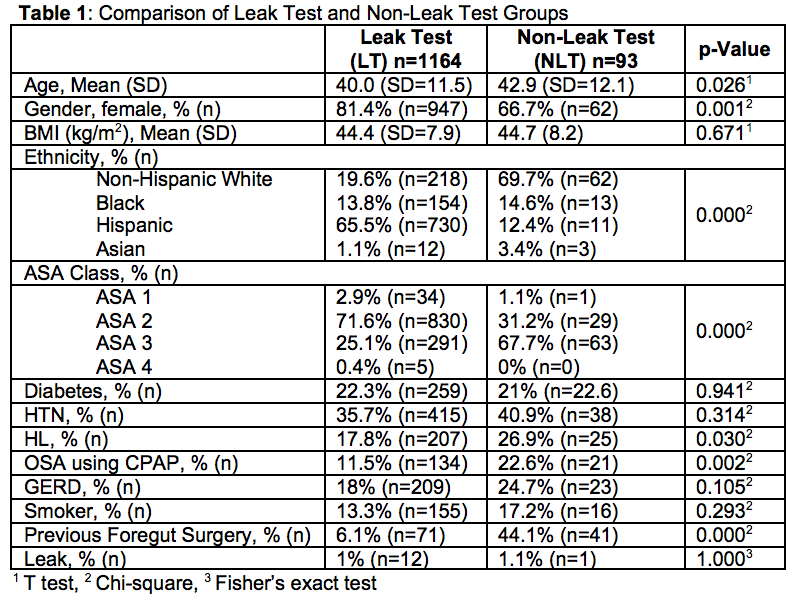