Intractable marginal ulcer after gastric bypass in morbidly obese patients: A comparison of RY bypass and One anastomosis Mini bypass

Background: Marginal ulcer (M.U) formation remains a significant complication, it can occur early or late after surgery of gastric bypass. In this study, we evaluated the incidence, presentation and outcome of intractable MU.

Results: Fourteen patients (0.6%) developed intractable MU, divided as 8 perforations, 4 sever stenosis and 2 intractable pain all required surgical intervention .The incidence between LMGB and RYGB are nearly similar (0.63% and 0.7%) respectively. None of the 14 patients had NSAIDs or steroid ingestion. Among all the population, 500 (24%) were smoker and twelve (2.4%) of them developed intractable marginal ulcer.  556 (26%) patients were diabetic and five (0.89%) of them developed intractable marginal ulcer.  Laparoscopic surgery was performed in 10 patients and the other 4 received open surgery.   Further analysis disclosed that smoking is the most important risk factor and carries 20 times risk than non-smoker.

Conclusion: Intractable ulcer requiring surgical intervention <1% of gastric bypass patients. There was no difference between RY bypass and one anastomosis (mini) bypass.  Smoking is the major risk factor for MU. 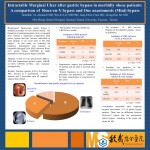