Introduction: Laparoscopic surgery's complex maneuvers during the procedure occasionally require rough handling. This can result in more opportunities for the cancer cells to migrate into the corporeal cavity. These free cancer cells may be the cause of peritoneal or local recurrence. A previous Japanese clinical trial showed that the rate of peritoneal recurrence was higher with laparoscopic resection than with open resection.

Objective: Our aim was to compare the amount of perioperative intracorporeal free cancer cells between laparoscopic and open resection. We evaluated the levels of carcinoembryonic antigen (CEA) mRNA at the beginning and at the end of the surgery. Furthermore, the clinicopathological risk factors associated with migrating cancer cells during laparoscopic resection were analyzed.

Patients and methods: One hundred and fifty-eight patients who underwent curative intensive surgery for colorectal cancer were enrolled in this study. The male:female ratio was 85:73. Twenty one patients underwent open resection, and 137 underwent laparoscopic resection. Saline (100 mL) was introduced into the abdominal cavity at the beginning and end of the surgery. For laparoscopic resection, 100 mL saline was added following trochar insertion. The peritoneal cavity was washed with 1 L or 2 L lavage at the end of all procedures; then, 100 mL saline was added again. CEA mRNA levels were determined via a quantitative reverse transcription-polymerase chain reaction. A CEA mRNA level of greater than zero was classified as positive. Clinicopathological factors (age, sex, pT <4 or pT = 4, lymphatic metastasis <4 or ≥4, colon or rectum, peritoneal lavage 1 L or 2 L) were analyzed as variables using logistic analysis.

Conclusion: Laparoscopic resection for colorectal cancer with many lymphatic metastasis may result in postoperative peritoneal metastasis. 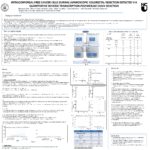