Objective of the technology or device: The purpose of this study was to show the feasibility of using Lap-Jack, an independently developed purse-string suture instrument, in performance of intracorporeal end-to-side esophagojejunostomy.
Description of the technology and method of its use or application: After radical lymphadenectomy and exposure of the abdominal esophagus, an endoscopic bulldog clamp is placed the esophagus. Lap-Jack is inserted into the peritoneal cavity through a 12 mm trochar without any extension of the wound in the left lower quadrant. Once an operator press the front button on the outer grip part, the distal clamp pops out. On the other hand, the proximal clamp is also released as the inner grip part is pushed into the outer grip part. The esophagus ( proximal to the endoscopic bulldog clamp ) shall be pressed between the clamps by pushing forward the inner grip part till it clicks. Since each clamp has a jaw of purse-string clamp, the esophagus is compressed same as purse-string clamp for open surgery. One jaw is penetrated by a straight needle with a 2-0 polypropylene thread, and opposite needle of the thread is also passed through the another jaw. Then, the esophagus is transected between Lap-Jack and endoscopic bulldog clamp. After the rear button of outer grip part is pressed to release the binding of inner and outer grip parts, the jaws is opened by pulling the inner grip part from the outer one. In addition, both clamps are integrated to the shaft by manipulating the grip parts. Therefore, the Lap-Jack can be removed through 12 mm trochar. As a result of these process, a purse-string suture has been made on the esophageal stump without extension of any port wound.

Preliminary results : From April 2010 to Dec. 2013, Lap-Jack was used for 262 intracorporeal end-to-side esophagojejunostomy. Among 258 patients, 190 were male and 68 were female. Average age was 60.6 ± 12.8 years. The average operative time was 218.7 ± 64.8 minutes. The overall morbidity rate was 18.5% without any mortality. No leakage or stenosis of esophagojejunostomy was reported.

Conclusions / future directions: The Lap-Jack is feasible and suitable for use in performance of intracorporeal end-to-side esophagojejunostomy during laparoscopic total or proximal gastrectomy. 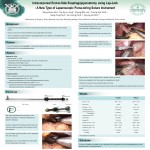