As part of the efforts as the former chairman of the IFSO Varianational Committee on New Procedures we performed a survey of bariatric surgeons around the world. The goal was to assess expert surgical judgment of the risks, benefits and outcomes of various bariatic procedures. This paper reports survey expert opinion on the Adjustable Gastric Band.

Methods: Email was used to canvas 1,800 IFSO members to complete a survey on the risks, benefits and outcomes of the Band. 102 surgeons answered detailed survey online. Surgeons came from 6 Continents and 23 countries. The group reported on a past year’s experience with over 39,000 cases, so these were clearly very experienced surgeons.

Results: The results of this survey can be summarized as: in the judgment of these experienced bariatric surgeons the Band is "Poor" bariatric procedure and should probably not ne done. We asked the surgeons 105 questions some of which are described below:

Yearly case load: 100-300, 30% of practice Band, 93% requested copies of the survey and 60% asked for anonymity. When asked their opinions about the "Band" only 6% said "Band is good, short simple surgery, maybe the best form of WLS, I use it often", 58.7% said "Band is OK it is an acceptable alternative and I use it sometimes" and 34.7% said "Band is a Bad operation and should not be used."

This was significantly more saying than Band was "a Bad operation and should not be used" than for Sleeve, RNY or MGB (5.5%, 4.1% and 14% respectively.)

38.7% of respondents had previously used the band and had abandoned it.

In summary this small sample of expert bariatric surgeons generally provide the Band strongly negative reviews. Although they reported that the band was easily performed, in every other way measured the assessment of the Band by these experts was poor and significantly worse than similar assessments of the Sleeve, the RNY and the Mini-Gastric Bypass. More than 1/3 said the Band was a "bad operation and should not be used" and many are now abandoning the band. This study suggests that there is reservoir of knowledge and experience that has here to fore been untapped that may assist surgeons and their patients in making good decisions about weight loss surgery. 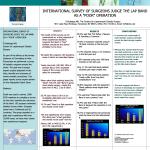