Internal Hernia With Small Bowel Incarceration Due to Meckel’s Diverticulum

Objective:
We report an unusual case of small bowel incarceration due to a Meckel’s diverticulum causing an internal hernia. CT demonstrated several loops of dilated fluid-filled bowel with a twisting of the bowel in the region of the terminal ileum. This case highlights the feasibility of computed tomography in contributing to a prompt preoperative diagnosis and early surgical intervention.

Introduction:
Meckel diverticulum(MD) is a common congenital anomaly of the gastrointestinal tract that occurs in about 2% of the general population. The majority of the patients are asymptomatic but 17-22% may manifest symptoms of bleeding, abdominal pain and intestinal obstruction. In adults, small bowel obstruction (SBO) is the predominate presentation and is frequently due to intussusception, volvulus around an associated fibrous or omphalo-mesenteric band, adhesions from an inflammatory process, or incarceration within a hernia sac. We present a rare case of an acute small bowel obstruction due to MD.

Method:
A healthy 26 year old male presented with two day history of right-sided abdominal pain associated with obstipation. On examination, his abdomen was mildly distended with right-sided tenderness and guarding. Rectal examination was unremarkable. WBC was 17300/mm³. An abdominal CT showed multiple dilated fluid-filled loops of small bowel, with twisting of the bowel in the region of the terminal ileum (figure 1). Findings were consistent with (SBO) suggestive of a volvulus of the small bowel in the right lower quadrant (figure 2).

At emergency laparotomy, a MD was identified approximately 20cm away from the ileocecal valve with its tip adherent to the adjacent mesentery (figure 3). The MD formed a bride-like lesion causing an internal hernia of ileal loop of bowel with incarceration (figure 4). The incarcerated small bowel was successfully reduced and the MD was resected. Pathology showed a MD without gastric tissue or necrosis. The patient recovered uneventfully and was discharged without any complications.

Results/Discussion:
Since originally reported in 1598 by Hildanus and then described in 1809 by Johann Meckel, MD is the most commonly encountered anomaly of the small intestine recognized to have clinical significance. Its clinical feature is typically described by “the rule of two’s”. In adults, the most common presenting symptoms of MD are inflammation and intestinal obstruction, which may occur as a result of a volvulus of the small bowel around a diverticulum associated with a fibrous band, intussusception or inclusion of the diverticulum in an inguinal hernia.

In the setting of SBO, the diagnosis of a symptomatic complicated MD may be difficult in adults. The efficacy of using CT to detect complicated MD has been controversial. Although CT diagnosis of SBO has high sensitivities of 81-96% with up to 96% specificity and 95% accuracy, accurate identification of MD as the cause of SBO is difficult. In our case, CT aided in diagnosing the rare etiology of a MD in incarcerated small intestine. Our case illustrates the utility and feasible of CT, especially in the emergent setting. The early diagnosis allowed early surgical intervention which ultimately resulted in a positive outcome in our patient. 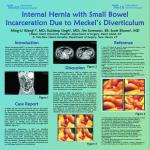