Background: Laparoscopic appendectomy is the gold standard for treatment of acute appendicitis. Stapled closure of the appendiceal stump is often performed and has been shown to have several advantages. Few prior cases have been reported demonstrating complications from free staples left within the abdominal cavity after the laparoscopic stapler has been fired.

The patient returned to the emergency department on postoperative day 17 with one day of sharp mid-abdominal pain, obstipation, and emesis. Her abdomen was distended and mildly tender but not peritoneal. She was afebrile but was found to have a leukocytosis of 13.2. CT demonstrated twisted loops of dilated small bowel in the right lower quadrant with two transition points, suggestive of internal hernia with closed loop bowel obstruction.

Diagnostic laparoscopy was performed through the three prior appendectomy incisions. An adhesion was noted between the Veil of Treves and the mesentery of a more proximal loop of ileum caused by a solitary free closed staple, remote from the staple lines, resulting in an internal hernia containing several loops of ileum (Figure 1).. The hernia was reduced, and the small bowel was noted to have early ischemic discoloration. The adhesion was lysed by removing the staple from both structures to prevent recurrence. Through the remainder of the procedure, the compromised loops of bowel began to peristalse and the color normalized. The procedure was concluded without resection. The patient recovered on a surgical floor and was discharged home on postoperative day one.

Conclusion: Gastrointestinal staplers are commonly used secondary to ease of use and low complication rate. It is not uncommon to leave free staples in the abdomen during laparoscopy as retrieval can often be more difficult and time consuming. Our case is only the second in the literature reporting an internal hernia with closed loop bowel obstruction as a complication of retained staple. Choosing the most appropriate size staple load, to reduce the number of extra staples after the fire, and removing as many free staples as possible can prevent potentially devastating complications. 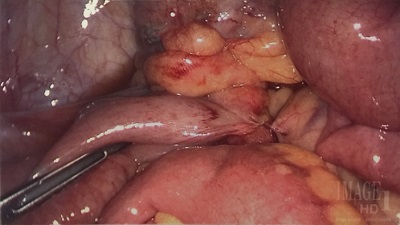