Introduction: Endoscopic Submucosal Dissection (ESD) is the gold standard for the removal of large sessile adenomas in Japan. Adoption rates in the U.S. have been low and colectomy remains the most commonly used treatment. Seven years ago, to introduce ESD into a surgeons practice the protocol below was initiated. This is a mid-study report.

Methods: Patients with large sessile polyps consented to polyp removal by 1 of 3 methods in the operating room. First, if deemed feasible, ESD excision (+ endoscopic mucosal resection (EMR) if needed) is attempted. If polyp not amendable or ESD fails, then a laparoscopic “wedge” partial circumference resection or a segmental colectomy is performed. Colectomy is mandated for polyps that do not fully lift because of concerns that a cancer which invades the muscularis propria is present. Other reasons why a polyp may not lift include prior “hot” snare use or scarring from prior inflammatory process. Prospectively gathered data about the polyps, patients and the pathology results were reviewed.

Conclusion: The authors have had limited success in removing polyps via ESD/EMR, however, in 58% colectomy has been avoided. Variable case volume is one issue. Also right sided polyps proved to be very difficult to remove. To improve ESD skills and to permit practice an intense ESD training program (ex vivo models) has been introduced. Also, in a subset of patients prior snare use causes scarring that prevents full lifting and eliminates ESD as an option. It is imperative that endoscopists refrain from snare use on large polyps if they do not intend to fully remove the lesion on that exam. 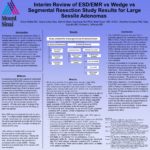