Methods
Patients who underwent esophageal stenting at Creighton University Medical Center over the last 5 years were included in the study. Charts were retrospectively reviewed for demographics, operative details, outcomes and complications in short and medium term follow-up. An excel database was set up and queried for migration rates in– group A (without anchoring) versus group B (stent anchorage). The technique involved tying a 2-0 silk suture to the proximal flare end of the esophageal stent prior to loading it on to the stent deployment system. Following fluoroscopic guided placement of the stent, an endoscopic forceps was used to pull the suture first into the oral cavity and then out through the nostril to be secured posterior to the ipsilateral ear.

Results
A total number of 41 esophageal stents were placed in 33 patients. Dysphagia was the commonest indication with anastomotic leak being the second most common. Prior to 2009, the conventional technique of esophageal stenting was used (N=30). Since 2009, the self devised method of using trans-nasal silk sutures for stent anchorage was applied (n=11). The mean age and gender distribution was similar in the two groups. Nine of the 30 stents migrated in group A (30%) while only 1 out of 11 stents migrated in group B (9.1%); p value 0.03. The displaced stent was removed in all patients except one in whom the stent placed for caustic stricture of esophagus migrated into the stomach and could not be retrieved endoscopically. One patient with stent migration had gastric ulceration with upper gastrointestinal bleeding requiring laparotomy. Globus sensation was reported by two patients with suture anchorage.

Conclusion
This technique is simple and in-expensive for anchoring the esophageal stent proximally without adding significant time to the primary procedure. With promising results in this pilot study, future research would involve setting up a randomized controlled trial applying conventional technique versus the suture anchorage technique for esophageal stenting. 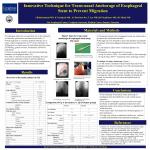