Materials and methods: A prospective non-randomised study of consecutive patients undergoing ultralow anterior resection from January 2013 to June 2016 was performed. Thirty three patients with low rectal tumors who underwent ULAR were classified into two groups based on whether defunctioning ileostomy was performed. A tube drain adjacent to the anastomosis in pelvis was placed in all patients. The leak rates and complications were analyzed in the two groups.

Results: Among the total of 33 patients, 15 had ileostomy and 18 did not have defunctioning ileostomy. Only one patient without ileostomy developed anastomotic leak, requiring laparoscopic peritoneal lavage and diversion ileostomy on post operative day 3. Two among the 15 patients with routine ileostomy had re-operation in the same admission for ileostomy obstruction. Though patients with ileostomy had early return of bowel function, there was no difference in the duration of hospitalization. 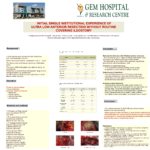