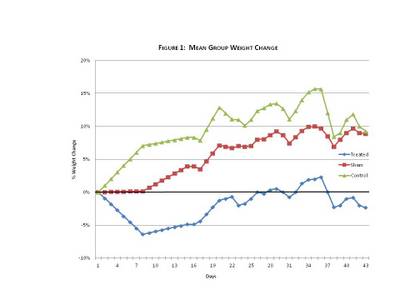 1. Objective of the technology or device

2. Description of the technology and method of its use or application

While in humans a purely endoscopic approach would be possible, the rat model is too small for endoscopic treatment so the procedures were performed surgically in an approved animal facility. Zucker-lepr obese rats underwent general anesthesia followed by mini-laparotomy. A 3mm gastrotomy was performed along the anterior aspect of the stomach in the region of the antrum in order to facilitate insertion of a delivery catheter. A 5F dual lumen catheter with tandem balloons placed at 12 cm spacing was used to isolate the section of small intestine to be treated. The proximal balloon was positioned just past the ligament of treitz, thus seating the distal balloon into the mid jejunum. This allowed isolation and exposure of the first 12 cm of the small bowel to treatment. Three groups of animals were randomly selected and the surgical team was blinded to the chemical solutions being utilized throughout the procedures. The gluteraldehyde treatment group (4 animals) proceeded with 0.05% gluteraldehyde exposure for 5 minutes, glycine neutralization for 2 minutes, followed by phosphate buffer exposure for 2 minutes. The sham surgical group (3 animals) proceeded with normal saline exposure for 5 minutes, saline neutralization for 2 minutes, followed by a final saline exposure for 2 minutes. The untreated control group (3 animals) were treated exactly the same as the treatment and sham groups except that they did not undergo anesthesia nor a surgical procedure. The catheter was removed; the gastrotomy and laparotomy were closed. Recovery period was completed and followed by advancement to full high fat feeds over 48 hours. Data was collected until 43 days post procedure at which point animals were euthanized and pathology specimens were collected from the small intestine.

Our treatment group showed 12% total body weight loss and lack of weight gain compared to our control groups at 43 days. One treated animal expired on post operative day 10 due to peritonitis. The remainder of the animals appeared healthy through the duration of the study. Gross pathology and selected histological analysis demonstrated normal small bowel tissue appearance. Our graphical weight change data plotted against days after the procedure is shown Figure 1.

We believe this trial demonstrates a simple, potentially endoscopically administered method of obesity/metabolic syndrome treatment in an obese rat model on a high fat diet.