Description: The patient was 52-year-old female with 7 cm of multinodular goiter in supine position with neck extended under general anesthesia. The oral cavity was disinfected using 0.05 % Hibitane in water. The first 10 mm incision was made at the center of the oral vestibule, with a subsequent space created passing the mandibular area to the anterior neck using a dilator. A blunt-tipped 10-mm trocar was inserted for a 10 mm 30° laparoscope. The CO2 insufflation pressure was set at 6 mmHg. Two 5 mm trocars were inserted at the uppermost and lateral areas near the lower lip on both sides pointing down to the anterior neck. Additionally, a working space was created beneath the platysma. The upper border of the dissecting area was the larynx, while the lower border was the suprasternal notch and the lateral borders were the anterior borders of both sternocleidomastoid muscles. Strap muscles were divided by cutting at the midline raphe. After dissecting the strap muscles from the thyroid, the ICG solution 4 mL (concentration of 0.17 mg/kg) was administered via the patient’s intravenous line. After approximately 1–2 minutes, images were acquired with a laparoscopic PINPOINT® camera (Novadaq, Ontario, Canada) for the near-infrared (NIR) fluorescent imaging. All identified parathyroid glands were scored visually for viability (no vascularity and gained vascularity), and angiography with ICG was then performed. The parathyroid glands appeared in shades of grey depending on the amount of ICG flowing through the parathyroid tissue, thereby reflecting the degree of vascular blood flow. Thyroid isthmus was dissected and transected. An ultrasonic device was used for the dissection and division of tissue and vessels. The superior pole including superior thyroid artery and veins were ligated as close to the thyroid as possible. The upper pole of the gland was lifted up with insertion of the recurrent laryngeal nerve at the larynx. Cutting the inferior thyroid artery and vein were performed close to the gland, with subsequent removal of the rest of Berry’s ligament. All parathyroid glands were identified and preserved. The specimen was removed using an endobag via the 10-mm incision. Strap muscles and oral vestibule wound were closed using absorbable sutures. 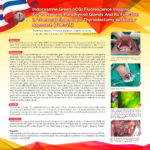