Introduction: Anastomotic leakage after rectal surgery is one of the severe complications and the major cause of this is inadequate perfusion of the colonic tissue.

Aim: The aim of this study was to evaluate the safety and the efficacy of intraoperative assessment of colonic perfusion using indocyanine green (ICG) fluorescence angiography.

Methods: ICG fluorescence angiography was performed in rectal cancer patients who underwent laparoscopic surgery from June 2016 to August 2016. Fluorescence imaging system, IMAGE1 SPIESTM (KARL STORZ, Germany) was used in all the cases. Prior to resection of proximal site, ICG (5.0mg) was injected intravenously and the blood perfusion of the planned transection point was assessed by the surgical team as “sufficient”, “insufficient” and “absent”. Any changes of surgical plans according to the results of ICG fluorescence angiography and time to perfusion after injection of ICG were recorded.

Results: A total of 34 patients were enrolled. Twenty-four patients (70.6%) were male, the median age was 61 years (range, 31-73) and the median BMI was 22.8 kg/m2 (range, 16.7-30.5). Two patients (5.9%) received preoperative chemoradiotherapy and 5 patients (14.7%) received preoperative chemotherapy. Thirteen patients (38.2%) underwent anterior resection and 21 patients (61.8%) underwent intersphincteric resection. The median height of anastomotic site was 3.0 cm (range, 0-8.0) from the anal verge. Diverting stoma was created in 27 patients (79.4%). No side effects related to the injection of ICG was observed. Twenty-six pateints (76.5%) were assessed as “sufficient”, 5 patients (14.7%) were “insufficient” and 3 patients (8.8%) were “absent”. Median time to perfusion was 50 seconds (range, 21-107) in “sufficient” group and 123 seconds (range, 77-156) in “insufficient” group, respectively. Eight patients (23.5%) were assessed as “insufficient” or “absent” and transection line was moved to more proximal site; no anastomotic leakage occurred in these patients. Anastomotic leakage (Clavien-Dindo grade IIIa) occurred in 1 patient (2.9%); in this case, the perfusion was assessed as “sufficient”, however, time for perfusion was delayed (107 seconds).

Conclusions: ICG fluorescence angiography is a safe and useful technique for intraoperative assessment of colonic perfusion during surgery for rectal cancer. 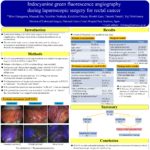