Introduction: Common bile duct injury is the most feared complication of cholecystectomy. Imaging with indocyanine green (ICG) is a safe and effective technique to detect biliary anatomy in open, laparoscopic and robotic surgery. Several studies report detecting aberrant biliary anatomy with the use of ICG in laparoscopic cholecystectomy with high success rates. By identifying the cystic duct–common hepatic duct confluence before dissecting Calot’s triangle, ICG allows surgeons to perform “virtual” cholangiography at the start of procedures to identify either normal anatomy or possible anatomic variants. It is clear that ICG use is an effective tool to achieve the critical view of safety. However, no reports have suggested ICG cholangiography as the last operative step in cholecystectomy to identify hidden biliary anomalies and avoid postoperative bile leak complications.

The cystic duct was transected, and the gallbladder was removed using electrosurgery. At the completion of the gallbladder removal, the liver was elevated to inspect the clips on the cystic duct and artery. At this point, near infrared imaging was reinitiated, and a small 1 mm structure was noted to fluoresce next to the cystic artery. This structure was identified using white light and subsequently clipped. 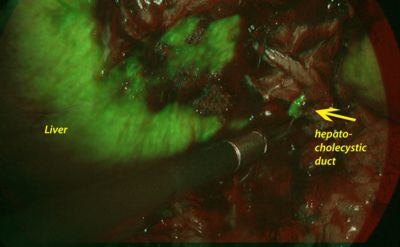 Figure 2. Use of ICG-enhanced fluorescence upon completion of cholecystectomy demonstrated an aberrant hepatocholecystic duct.

Discussion:  The use of ICG in this context after the completion of the cholecystectomy facilitated the identification of a small hepatocystic or aberrant duct, which would have likely leaked bile sometime in the postoperative period. Based on our experience, we recommend one additional routine near infrared viewing to identify small structures or potential leaks at the completion of cholecystectomy. Improved visualization of the extrahepatic biliary anatomy by ICG has the potential to translate into improved clinical outcomes. Limitations to ICG cholangiography include the inability to visualize deep ductal structures due to limited penetration of near infrared light and poor exposure of Calot’s triangle with inexperienced laparoscopic surgeons. Future studies should aim to establish guidelines on optimal dosage and time frame for ICG administration and bile duct visualization.