Introduction: Based on data previously published by our institution, this study aims to develop a long-term mortality probability calculator for bariatric patients.

Methods: Using SPARCS NY longitudinal administrative database, 7,862 adult patients who underwent bariatric surgery from 1999-2005 were analyzed. A multiple Cox proportional hazard model was used to build a prediction model for post procedure long-term mortality. The baseline survival function was estimated by exponentiating the negative empirical cumulative hazard function. Internal validation of the model was based on bootstrapping and C-index was calculated to evaluate discrimination accuracy of the model and shrinkage estimates were used for further calibration. External validation was based on SPARCS data from 2006-2010. 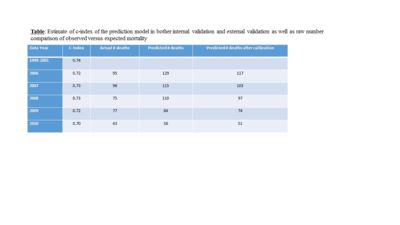 Conclusion: The model effectively predicts long-term mortality following bariatric surgery through both internal and external validation. A computerized application allowing easy input of patient specific information and output of individual long-term mortality risk as compared to the general and obese population is under development.