Indication for En Bloc Pancreatectomy with Colectomy: When is it safe?

Introduction: Aggressive en bloc resection of adjacent organs is often necessary to completely resect pancreatic or colonic lesions. However, it is currently debated whether simultaneous pancreatectomy with colectomy (P+C) is warranted as it increases morbidity and mortality compared to either operation alone. We hypothesized that morbidity and mortality would be increased in P+C, especially in cases of acute and chronic pancreatitis.

Methods: All consecutive patients who underwent pancreatectomy (P) and simultaneous pancreatectomy with colectomy (P+C) at a single high volume center from November 2006-2015 were prospectively included in this study using the ACS-NSQIP database. Patients with additional multivisceral procedures or parenchyma-sparing pancreatectomy were excluded. Data was augmented to 90-day outcomes in both groups using our institutional pancreatic database.

Conclusions: Although addition of colectomy to pancreatectomy substantially increases morbidity and mortality, colectomy in itself is not an independent risk factor for additional morbidity. Further, subanalysis revealed the type of pancreatic resection performed, etiology (pancreatic or colonic, malignant or benign) and planning status did not account for increased risk when performing colectomy with pancreatectomy. Therefore, patients should be informed, in advance, of the risk of postoperative complications. However, indications for additional colectomy should be broader, if required, to achieve complete resection during pancreatectomy. 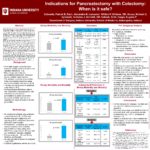