The diagnosis of incidental papillary thyroid microcarcinoma(PTMC) submitted to thyroidectomy for benign disease quits frequent ranging from 1.3-22%, however its management remains controversial.Most guidlines recommend total thyroidectomy followed by radioiodine ( RAI) treatment and TSH suppression therapy.According to other opinions, when the tumour is limited unilaterally, hemithyroidectomy of the affected side is the treatment of choice without postoperative RAI ablation.The medical records of 142 patients who underwent video-assisted minimally invasive thyroidectomy(MIVAT) for benign disease established by US guided fine needle aspiration cytology (FNAB) were analysed based on the final pathologic report.The following parameters were evaluated:frequency of PTMC, pathological lesion size,extrathyroidal tumour extension, vascular and or lymphatic invasion, multifocal disease, extent of thyroid resection and further surgical strategy and follow up evaluation results.In this series, authors found 8 cases(5.6%) of PTMC.The mean diameter of nodules characterised benign preoperatively by FNAB was 22.3mm(14-31mm).The mean diameter of PTMC-s was 5.6mm( 2-9mm). Two of them were encapsulated forms at the final histology.None of PTMC-s showed extrathyroidal extension and vascular or lymphatic invasion.In one case, two foci of tumour were found in the affected lobe and in the isthmus. In all cases as a primary operation, a hemithyroidectomy was performed by MIVAT technique that is a complete extracapsular resection of the thyroid lobe together with the full isthmus and with the pyramidal lobe.A completion thyroidectomy by MIVAT technique followed by RAI was performed only in one case, where the tumour showed two tumourfoci. In the mean follow up of 23.2±15.2 months ( range 6-60 months) including laboratory and US investigations all the patients were free of recurrent disease. Conclusions:According literature data and authors’ experience incidental diagnosis of PTMC may be frequent, but PTMC shows a variable degree of aggressivenes. An appropriate surgical treatment strategy is needed for individual patients with PTMC to avoid overtreatment for the majority of patients with" innocent cancer".But longer follow up analysis should be done on these patients to make definite conclusions. 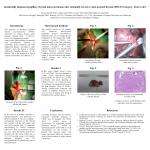